"What makes me optimistic? I can be self-sufficient. I can achieve things. I can do.   Coupled now with learned knowledge, I'm as competent as anybody. So I'm not put off by difficulties. My view is, "How can I do it differently?" And I do have to do it differently, and I have to think about my mobility."

Today I met Cameron Algie, the Author of "I Can See Clearly Now: Understanding and Managing Vision Loss."  I took the opportunity to ask Cameron a few questions. 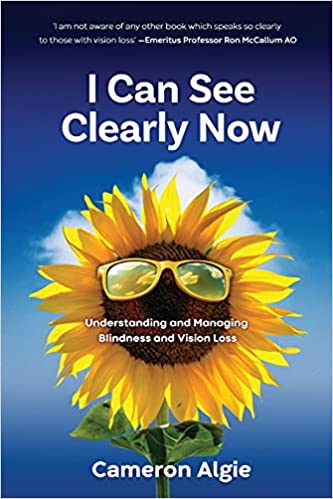 Victor: "Cameron, tell me more about your book "I Can See Clearly Now: Understanding and Managing Vision Loss."

Cameron Algie: "It's a reference book. It's bringing together, for the first time, for people who are losing their sight and their families a combination of issues and solutions that people experiencing vision loss encounter.

"For example, it covers the fear, grief, loss, and psychology of blindness. It covers what happens.

"Why do we respond the way we do? Why, for example, do many people go into denial and avoidance as a response to it?

"And then dealing with all the solutions out there, because if you can capture people in the early stages of their vision loss, medically, it's called adjustment disorder. People are not able, capable, or prepared for the shock of such a change. So if you catch them early in that progression, you can inspire them in what's possible.

"In other words, you can still lead a very full and rich life, but you'll be doing things differently than before the vision loss. Very hard for some people to accept that because they'll often live within their comfort zone and therefore not be willing to accept that they can be different and still live well.

Victor: You're looking at the available technologies, the adaption. Tell me some of the hope and optimism you have for people going blind in this day and age.

Cameron Algie: Well, your comment "in this day and age" is relevant. It's changed dramatically, Victor, because the technology is fantastic, and much of the good stuff is free.

"There's an app, for example, that goes on iPhones, and an app for the Android version, as well; you turn it on by speaking to the phone, and it will read almost anything instantly. Read anything you've put in front of it. Now, that's fabulous.

"Another app, Aira, has a free five-minute visual interpreting service, so a person can connect on the phone, use the camera, and read things out for you. So, for example, if you become totally disorientated in the street, they'll reorientate you and get you going.

"So that's a couple of the best apps, but there's more.

"We could spend an hour alone just on apps that work on computers.

"There's software that enables the computer to talk to you, so you can write, research, and do anything.

"We live in a wonderful time. A computer app NVDA: Non-Visual Desktop Access, developed by two blind men, enables full computer control. It's free and the most popular software in the world for the blind. It's terrific, Victor. So that's some of them.

Victor:  And you've got choices like Audible, haven't you? So there's no reason not to read books?

Cameron Algie: "That's right. There's Audible. There are all those downloads on Amazon, Audible, Apple's eBooks, etc. Vision Australia has an audio library, which is fantastic. I've read more books since I've been vision-impaired than when I was sighted. And, of course, you've got to access all the blogs and other stuff, like the ABC app.

Victor:  Cameron, you can't get away with a conversation with the Center for Optimism without me asking you: What makes you optimistic?

Cameron Algie: "What makes me optimistic? I can be self-sufficient. I can achieve things. I can do.

"Coupled now with learned knowledge, I'm as competent as anybody. So I'm not put off by difficulties. My view is, "How can I do it differently?" And I do have to do it differently, and I have to think about my mobility.

"I travel overseas. I've been travelling overseas now, frequently, by myself. So you've got to tap into all the services there to assist.

"So my feeling about optimism in respect of disability is simply that the general public, if I can be so general in that phrase, is not exposed to disability. An ABC survey conducted in 2018 said that 70% of Australians have little or no contact with disability. So it's not just vision loss, Victor; it's actually the broad scope of disabilities that people don't know how to respond to them. And as a result, often close off and see disability negatively when the impact may be quite positive. We can do things differently. That's the great joy and spirit of humanity, really.

Victor: "A remarkable coincidence: The Center for Optimism is in partnership with a Finnish organization, The Art and Science of Joy. Optimism will be the first Superpower of Joy in their Year of Joy in 2023.

"Cameron. You used the word joy. What makes you joyful?

Cameron Algie: "Ah, many things bring me joy. It ranges from the personal, physical experience of enjoying the day, like a beautiful warmth of a nice day. To read an exciting book. When you still use the phrase read, when I'm actually listening to it. And why not? Why change the vocabulary just because you've got a disability?

"I take great joy when after the 14 years that I was running these peer support groups for people with vision loss, at the end of the sessions I ran, people would come up to me and say, "You changed my life."

"I cannot get a better feeling of exhilaration from that expression, "You changed my life." .

"So if I've changed people's lives, even if it's just getting them to take up technology, that's wonderful.

Victor: So, do you want to share a couple of those stories of hope and optimism of the people you've helped through the peer group?

Cameron Algie: "Where do I start?

"Some people come into my groups in tears saying, "I'd rather be dead than blind. So I help people through that fear, grief, and embarrassment, and they suddenly find that they can do things again.

"A man came into one of the groups; he'd retired and wanted to do things on a computer; however, his loss of sight had taken his confidence. We guided him to the right software. We helped him change to get a smartphone. From being extremely pessimistic, he turned into the most positive man I've met.

"It's understanding that you can do things. But I say that concept again and again: You can do it differently. What's it matter?

"Most people have perceptions that they should be a certain person or look a certain way or do things in a certain way, and if you can cast that off, come back to that concept of adjustment disorder. Get them early and show that you can do things differently.

"I'll tell you another example, Victor.

"A mid-age lady was in a group. She was in from Queensland. She came in in tears. She was losing her sight very rapidly. At that stage, an app called "Seeing AI" was available using the device camera to identify people and objects. Then, the app audibly describes those objects for people with visual impairment.

"I said, "Look, go to Vision Australia and get them to download it for you," because she was not confident in doing that. And so she did.

"I rang her back a week later: "How are you going with it all?" And she said, "I'm so happy. I've been going around my home reading everything." Oh, that was just a moment of joy. It truly was, for her and for me."

Cameron Algie was born and raised in West Gippsland, Victoria, and in the normal course of things, may have gone on to remain a farmer to follow the family tradition. However, in the summer of 1968-69, when walking through fields where a full harvest moon hung low, this golden orb suddenly disappeared. Within a few seconds, the moon reappeared, and there were no clouds in the sky. This mysterious event became the portent of future drama. Cameron was diagnosed with a degenerative retinal disease with the rather droll name of retinitis pigmentosa (RP), with a prognosis leading to inevitable blindness. Despite his vision impairment, after studying Law at Monash University, Cameron became Chief Executive Officer for the industry body representing Cooperative Housing Societies. In his Government Relations and Industry Development role, he created an environment where funding for home loans to this sector grew from $3 million in 1981 to over $680 million nine years later. During this period, Cameron worked with his wife to establish a Society for RP research. In recognition of this and his Housing Society work, he was made a Member of the Order of Australia in 1993. Turning back to the Law, Cameron conducted major test cases in nuisance and equitable interests in property, becoming a Member of Planning Panels Victoria, the ministerial advisory body on planning matters.In a final career change, he later became a Facilitator with Vision Australia, where his life experiences and those of clients now form the basis of this book.

Optimistic because I am Contributing Positively: Vadim Taube

Paul Oestreicher Searching for Optimism in 2023