What makes you Optimistic?

I have been a lifelong optimist. Of course, like most optimists, I have my share of grief and failure, but I always think things will work out alright in the end.

I was born in Australia and am fortunate that the traumas my ancestors and family suffered on the way to Australia strengthened them and their realistic optimism and was passed on in stories and narratives.

My grandparents and parents faced Soviet terror with courage, and the family survived through optimism and persistence.

My paternal grandfather was tortured to death.

My paternal grandmother was sent to the Gulag.

My maternal grandparents and parents were refugees facing death on several occasions.

My paternal grandmother was a great example to me. After surviving the Gulag, Bronislava Petronaitiene was determined to outlive communism and participated in the civil disobedience which led to the 1991 collapse of the Soviet Union.  I fondly remember her cheery greeting on the phone on the day of the dissolution of the Soviet Union.

Most importantly, I had the lifelong influence of my mother, Lilia Perton. She died at the age of 92 in 2020 and taught yoga until a few months before her death.

Mum's stories of teenage life in Europe in the 1940s during war and famine could have been hair-raising. Still, she told them with humour and almost always with a happy ending.

My father passed away when I was eight.  Lilia showed great courage and resilience: She said that yoga practice and meditation helped her to manage life with optimism and strength.

Her motto was passed down to me, "Strong and Calm; I manage my life."

A week before she died, she told me that she believed that the work I am doing asking people what makes them optimistic is the most important work I have done.

How did I come to be doing this rewarding work of spreading optimism by asking people what makes them optimistic?

I spent several years in the Americas working in international trade and development and then as a senior adviser to the G20 presidency. My work was made easier by the very powerful positive stereotype of Australians.

When I returned to Melbourne, Australia, I was struck by the negativity toward leadership.  It appeared to be increasingly negativity, and it struck me in day-to-day language and humour.

Rather than complain about the complainers, I established the Australian Leadership Project.

After thousands of interviews, we concluded the leadership was comparatively good.  However, we remained perplexed by the negativity - on most measures, Australia was one of the best places in the world to live and work.

In late 2017, my Eureka moment came at the Global Integrity Summit: It was not a problem of leadership but a fog of pessimism.

I started interviewing people about their optimism and eventually found the most compelling question was, "What makes you Optimistic?"

I wrote and published the book "The Case for Optimism: The Optimists' Voices."

Following the publication of that book, I was struck by people's desire to learn more about how to be optimistic and the yearning for stories of optimism and hope.

I made asking the question "What makes you Optimistic?" into a habit - meeting people formally and informally in interviews, on the street and on social media.

For most people, it's the first time they are asked about their optimism.

I present the case for optimism in keynote speeches, workshops, roundtables, and retreats in corporate environments, universities, schools, community groups, and even in prison.

How do I enhance my Optimism?

Thinking about how I enhance my optimism, I am very grateful for the circumstances in which I live.  I make sure to thank people every day, from gardeners, workmen and women on the street to barista, waitresses and cooks at places I visit.

My children and I engage in daily gratitude practices. And, of course, it's always nice to be on the receiving end of other people's gratitude.  Generally at the end of the dinner, we share the three best things in the day.

I say hello and smile at each person I pass in the street and in corridors.  I often strike up conversations standing on street corners.

I meditate in several styles, from simple breathing exercises to guided meditation to using mantras. I do yoga but could always do with more. I enjoy the beauty of nature and try to rise before dawn to enjoy the colours of the morning, which, if exceptional, I take photos of and share with family and friends and on social media.

Less News: More Sharing of Stories of Hope and Optimism

I have turned down the news and used carefully selected search agents to find the good news that interests me. I am fortunate to have family and friends share materials with me. But, of course, I don't want to be a hermit, so I keep in touch with mainstream news services despite the overwhelming pessimism they propagate.

I enjoy humour and cartoons, and most days listen to and search out some jokes and tell some jokes. My preference is for the Australian tradition of self-effacing humour.

Asking People what makes them Optimistic

And, of course, I have the advantage that almost every day, I ask people what makes them optimistic and share those answers with the world. So that's uplifting and joyful.

Asking that question of people personally, during workshops and in my hour of optimism series has been a big part of helping me thrive despite the natural anxiety and frustration at having freedoms restricted.

Presented with evidence of the positive impact of optimism on mental and physical health, people quickly get the case for optimism in the world of work and family.

People ask, "How do I become more optimistic?"

They want to know how to do it.

In these times of pessimism and cynicism, optimism is sometimes met with cynicism and doubt. People have told me:

"I am an optimist but criticised for being unrealistic: What do I do?"

"I have a very negative person in my weekly meetings bringing down the morale of the team; what do I do?"

There are answers to these questions in my book, 'Optimism: The How and Why." 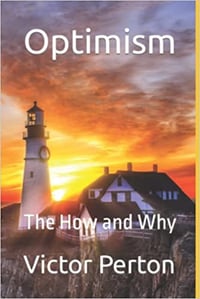 My questions for you:

Why don't you try it ? Ask someone, "What makes you optimistic?"

Most people are surprised at how asking the question lifts the person asked and the questioner.

As the leadership author Megumi Miki said to me after I asked her the question, "Even being asked the question "What makes you optimistic?" caused me to look for the bright side, which is very uplifting. When you couple optimism with the courage to confront reality, it is a powerful force for positive change."

Please give it a go! Empower yourself. Empower others.