"You must realize that I am far from feeling beaten…it seems to me that… a man out to be deeply convinced that the source of his own moral force is in himself — his very energy and will, the iron coherence of ends and means — that he never falls into those vulgar, banal moods, pessimism and optimism. My own state of mind synthesises these two feelings and transcends them: my mind is pessimistic, but my will is optimistic. Whatever the situation, I imagine the worst that could happen in order to summon up all my reserves and will power to overcome every obstacle."

The Honourable Kim Beazley AC, when Governor of Western Australia

"Anton Gramsci once said the correct position for a social democrat like myself was pessimism of the intellect but optimism of the will. Optimism without realism handicaps a society. Realism without optimism defeats it. In the confused world we inhabit it is the optimists who seize every opportunity for a constructive outcome. As a friend said of Winston Churchill's view in 1941 when all seemed bleak- his stance was " something will turn up. Fight on and give it a chance".

"In terms of optimism of the will, Gramsci means that humans have the capacity to overcome new challenges, to courageously move forward and create a better world in the face of very long odds. We can’t predict the course of history but human agency is paramount and history is made by human will."

Azra Raza, Oncologist and Author of The First Cell

“Antonio Gramsci famously imparted: “Pessimism of the intellect, optimism of the will.” In other words, see the world as it really is, warts and all, but still forge ahead with courage, tenacity, persistence, acceptance. The will can overcome many challenges if hope remains alive.”

“The Italian Marxist Antonio Gramsci argued that revolutionaries must stare reality in the face and find ways to push the class struggle forward. He borrowed the phrase, “pessimism of the intellect, optimism of the will” to deal with the problem. As a phrase it is a powerful warning against wishful thinking. And at the same time a cry against resignation. It proposes a determined, open-eyed engagement.”

"It is Antonio Gramsci who is commonly credited with the thought, “Pessimism of the mind, optimism of the will.”

But it seems Romain Rolland, the French writer who won the Nobel Prize in literature in 1915, actually said it first.

Gramsci went on to make it a sort of political ethos, a guide to thought, or a way to manage one’s mind and live in the world as it is. We should take note of Gramsci’s views on optimism and pessimism.

He had much to say about both. Mussolini imprisoned Gramsci, a founding member of the Partito Comunista d’Italia, the PCI, in 1926, and he remained there until he died in 1937. It was in those years he wrote his celebrated Prison Notebooks—30 of them comprising 3,000 pages of reflections. Prison was a radical deprivation—he lost a public life of political participation to one of solitude and incapacitation. It was also 11 years of agony, fraught with insomnia, violent migraines, convulsions, systemic failure.

But Gramsci seems to have understood from the first that his most dangerous enemy was despair—lapsing into a state of purposeless quiescence, as if falling into a deep, dark hole.

Here he is in a letter to his sister-in-law, Tatiana, shortly after his arrest:

I am obsessed by the idea that I ought to do something für ewig [enduring, lasting forever]. . . I want, following a fixed plan, to devote myself intensively and systematically to some subject that will absorb me and give a focus to my inner life.

This is an early hint, in my read, of the thinking that was to come. In this letter Gramsci made deep connections—on one hand between pessimism and a state of depression and passivity, and on the other optimism and the taking of action. In the latter he saw salvation, and I could not agree more: I have long thought that a principal source of depression is the sensation of powerlessness. Whenever I have been overcome in this way I have said to myself, “Take the next step. It may be a mile, it may be six inches. Take it and you will have begun to act.”

Most of all, Gramsci seems to have concluded as his teeth fell out and he could no longer eat solids, that optimism is something one must purposefully marshal, cultivate, against all threats of dejection and hopelessness.

In letters and in passages in the Notebooks he identified optimism as essential to all political action.

What good would optimism be, he asked in “Against Pessimism,” published in 1924, when he was still able to place pieces in newspapers, “if we were… actively optimistic only when the cows were plump, when the situation was favorable?”

"Optimism of the will need not be some sort of quasi-religious blind faith. It is based instead on historical realities, on the fact that the application of human ingenuity and struggle is what has brought us from the caves to something approaching civilisation, and created a modern world in which people’s lives in almost every corner of the globe are now longer, healthier and wealthier than ever before.

"Yet that optimism of the will seems to be in short supply today. Many have lost faith in humanity as a history-making agent."

"Optimism of the Will means, have the courage to attempt difficult things. Sometimes, Will can overcome the odds."

"To make hope real, to exercise an optimism of the will, you have to invest in it: your time, your energy, your sense of self and your role in the world. Without that, movements cannot move."

Timothy Garton Ash, Guardian columnist, in "We remainers must now aim for Britain to do well – and the EU even better" (January 2020)

"Pessimism of the intellect, optimism of the will: such is the perennial brief of the liberal realist. Expect the worst, work for the best."

Ramzy Baroud in ‘Optimism of the Will’: Palestinian Freedom is Possible Now"

"In his “Prison Notebooks”, anti-fascist intellectual, Antonio Gramsci coined the term “pessimism of the intellect, optimism of the will.”

While logical analysis of a situation may lead the intellect to despair, the potential for social and political revolutions and transformations must keep us all motivated to keep the struggle going, no matter the odds.

“I don't think we have any alternative other than remaining optimistic. Optimism is an absolute necessity, even if it's only optimism of the will, as Gramsci said, and pessimism of the intellect.”

Arwa Mahdawi, Guardian columnist in "Yes, the climate crisis is terrifying. But I refuse to abandon hope"

"Antonio Gramsci said that we need the pessimism of the intellect and optimism of the will. Those, I think, are words to live by. We must not delude ourselves about the immense challenges the world faces, but we can’t let anxiety overwhelm and paralyse us. The world isn’t doomed quite yet – there is still a window of opportunity to change things. Particularly as, some well-respected climate scientists point out, we have the technology to save the world. We don’t need to wait for a miracle; we just need the will."

"The antidote to destructive pessimism isn’t a bigger dose of unrealistic optimism (though many people and organizations are still trying to convince us that exponential population and consumption growth will work out just fine in the end). Indeed, more and more people are resorting to rage, fatalism, nihilism, and escapism precisely because what they are actually experiencing is so incongruent with the dominant cultural narrative of progress and abundance. Instead, the most helpful attitude from here on will be a refusal to accept the inevitability of the very worst outcomes. It is a stubborn insistence on imagining alternatives to growth and working hard to realize them—while acknowledging that most of our existing technological and social structures were designed during the era of expansion and will likely fail under conditions that are now emerging. Italian philosopher Antonio Gramsci (1891-1937) may have put it most succinctly in his motto, “pessimism of the intellect, optimism of the will.”

"Today, the Italian parliament has become a largely symbolical political dustbin, where many  contentious political parties obscenely shout at each other to approve, in the end, approximately the same laws. The Italian situation is in reality perfectly consistent with the global trend of Western democracies, which have largely become competitive one-party systems, to use the expression of a late Italian historian of ideas. Italian subalterns, henceforth, must have no illusions. No relief will come from any parliamentary party. Those willing to engage in political action, therefore, will have to organize outside the parliament. Italy has a long history of extra-parliamentary political activity, and it is precisely this history that concerned Italians should look at for inspiration. Today, genuine oppositional leftist forces in Italy are weak and divided. To unite and to fight together for survival will be no easy nor quick task. On the contrary, it will be long, difficult, dangerous, and ungrateful. The Italian Marxist Antonio Gramsci’s (1891-1937) call for “pessimism of reason, optimism of the will” has never been more relevant."

"My mother Jena’s life was indescribably harder than mine has been. At the worst of times, she believed life is munificent and that good people are all around us. She used optimism of the will to beat back engulfing pessimism."

"It is a patent truth that the universities are not sacred spaces, they don’t exist in isolated terrain and so they can’t remain immune from what is happening outside. Universities have a duty to dispel passionate intensity of any sort and certainly they must discourage certitude of all kinds be it ‘over enthusiastic optimism’ or ‘perpetual pessimism’. Universities, particularly in a situation like this must tread its course, as Gramsci suggested, in another context, with a judicious mix of both the ‘pessimism of the intellect’ and ‘the optimism of the will’"

Leo Panitch "remained until the end a unique personification of Gramsci’s “pessimism of the intellect and optimism of the will” (even if Leo himself turned this into a notion of “revolutionary optimism of the intellect”). Although he never thought that socialist transformation was near, he never denied his full support and solidarity for every endeavor that contributed, even in the slightest, to the socialist transformation of society."

Read more of these inspiring quotable quotes in "Optimism: The How and Why" by Victor Perton, CEO of The Centre for Optimism. 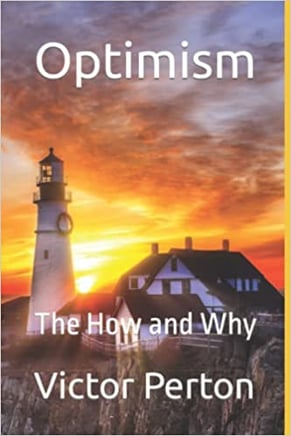 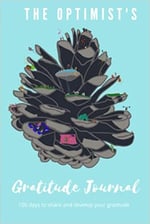 Project Optimism has produced "The Optimist's Gratitude Journal: 100 days to share and develop your gratitude" which is very helpful.