Where There's Optimism and Hope, There's a Future Cure

"Optimism and hope are key elements to fighting any health condition. Doctors and patient advocates know a person is more likely to recover from an injury or beat a disease like cancer when hope and optimism prevail."

Optimism and hope are key elements to fighting any health condition. Doctors and patient advocates know a person is more likely to recover from an injury or beat a disease like cancer when hope and optimism prevail.

For those of us in the battle against Alzheimer’s — whether personally, caring for a loved one, or in the lab working to create a therapy — what we have lacked for the past few years is hope as clinical trials have failed to produce that much-awaited cure.

In January 2019, Roche Holding and its partner AC Immune SA discontinued their two late-stage clinical trials of crenezumab for early Alzheimer’s. And in their April issue, the New England Journal of Medicine published results of Merck’s discontinued randomized trial (from 2013 to 2018) of verubecestat. These are just a few of the many failed drug trials.

But things in the Alzheimer’s world have started to look hopeful.

In 2017, the Lancet Commission reported that a third of dementia cases globally could be prevented if we alter multiple lifestyle factors such as hearing loss, exercise, and smoking (based on data from high-income countries).

In an updated study in 2019, the Lancet Commission found that the potential for dementia prevention was even greater in low-income countries like India (41%), China (40%,) and a sample of Latin American countries (56%). 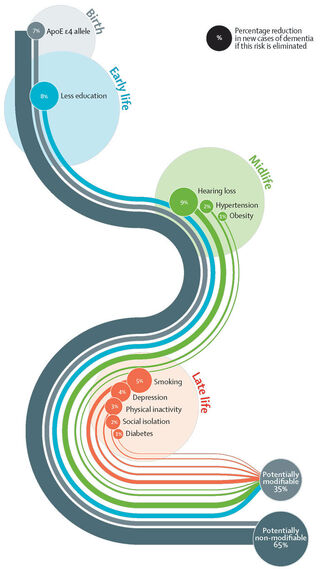 Life-course model of contribution of modifiable risk factors to dementia.

In another 2019 study led by the University of Exeter, the risk of dementia was found to be 32 percent lower in people with a high genetic risk if they followed a healthy lifestyle. With this optimistic news, we are entering an era of new hope.

What is driving this new hope for Alzheimer’s? It springs from a change in perspective among key opinion leaders and scientists in the Alzheimer’s space.

Because we don’t know if and when a heart attack will occur, doctors monitor patients by measuring their blood pressure. If an issue is detected, the doctor intervenes early to reduce the likelihood of a heart attack by prescribing a drug such as a statin.

Similarly, shouldn’t we focus on trying to monitor cognitive decline, and prescribe a statin-like medicine for the brain to prevent Alzheimer’s? Doesn’t it seem more likely to succeed?

With this perspective, we are seeing a massive shift in focus on early screening in primary care, and innovations to delay or prevent the onset of Alzheimer’s. Two examples are Savonix and Souvenaid.

With these advances, patients and clinicians are staying optimistic.

“My husband is living with early-onset Alzheimer’s and we’re hoping for a breakthrough in clinical trials in the near future,” said Edna. “While the clinical trial outcomes haven’t been real positive thus far, there seem to be several other new developments emerging. We think it’s only a matter of time before a cure or treatment is found. We are staying positive.”

While it is true there are more failures than successes in Alzheimer’s clinical trials, George Vradenburg, co-founder and chairman of UsAgainstAlzheimer’s, also remains hopeful and encourages others to do the same.

“In recent years, a dearth of new treatments for Alzheimer’s disease has left many to conclude that a cure is out of reach,” said Vradenburg. "There’s no doubt that setbacks are inevitable and instructive when tackling a complex disease like Alzheimer’s. But given the increase in understanding of the disease in the past few years and the steady rise in Alzheimer’s treatments in development, patients and their families have good reason to be optimistic.”

While clinical trials continue to find a cure for patients like Edna’s husband and new innovations are concurrently developing, there is no time like the present to take action for better brain health.

According to Dr. Rudy Tanzi, Harvard professor of neurology, more of these types of clinical trials are needed. "We spent so much time waiting for drug trials, but really there's a lot we can do to maintain brain health with our lifestyle," said Tanzi, who was not involved in the study.

Making healthy lifestyle changes shouldn’t wait till you are 60 or only when you notice a cognitive decline. It’s critical to be cognitive healthy now. Eat a healthy diet, exercise physically, and get your heart rate up for at least 30 minutes a day.

Remember to get enough sleep, put those phones down, and socialize more with one another as studies have shown we use more of our brains when we interact face to face with another human being.

"We envision a day where people can go to their doctor and instead of hearing there's nothing you can do, the doctor will say, 'Well, we may not have the perfect answers, but here are 21 different things you can do based on your individual risk to protect your brain health,’” said Dr. Isaacson.

Joining the Fight Against Dementia

In addition to living a brain-healthy lifestyle, here are some ways you can keep the hope alive.

Jefferson, R.S. (2018, November 18). Top Biopharmaceutical Research Companies Publish Update on the State of Alzheimer’s Research in US. Retrieved from https://www.forbes.com/sites/robinseatonjefferson/2018/11/29/top-biopharmaceutical-research-companies-publish-update-on-the-state-of-alzheimers-research-in-us/?ss=healthcare#4950e2274e77

Casey, A. (2019, May 1). Centre for Healthy Brain Ageing. Does social interaction reduce risk of dementia? Retrieved from https://cheba.unsw.edu.au/blog/does-social-interaction-reduce-risk-dementia

Read More on "Dementia and Optimism"